If you pay attention to the latest news from the WordPress community, you may have noticed the recent buzz regarding PHP 7. However, non-technical users may have a hard time understanding what PHP 7 is and why it matters for WordPress.

In this post, we’ll introduce you to PHP 7 and explain the updates that come along with this new version. Then we’ll provide four key reasons why it’s smart to upgrade to PHP 7 now, rather than wait until later.

For non-developers and newer WordPress users, PHP is a coding language. It’s commonly used to create dynamic content on your site, as well as collecting and encrypting data, sending and receiving cookies, and much more. The majority of WordPress is written in this language, as are myriad other applications.

PHP 7 is simply a major version of this widely-used open-source language. Just as updating your WordPress installation grants you access to new features, upgrading your server to the latest version of PHP can greatly improve your site’s functionality.

Some of the key enhancements that come with PHP 7 include:

Plus, there are additional advantages that may be of further interest to developers and other advanced users. As a bonus, PHP 7 requires fewer servers to run. This means on PHP 7, your website will require less energy for hosting, which is one small way you can reduce your carbon footprint.

For many users, upgrading is admittedly going to be in the hands of your host. However, if you’re a developer looking beyond the technical enhancements of PHP 7, updating may not seem like a big deal. However, there are several reasons why it’s wise to update your WordPress site’s PHP version as soon as possible. We’ve explored four below.

1. Get Ahead of the Curve and Be Ready for the Upcoming PHP Bump

As we mentioned earlier, there has been a lot of discussion around PHP 7 in the WordPress community recently. This is because it was recently announced that WordPress will be raising its minimum required PHP version.

This has been a topic of debate for some time now. Many users don’t understand the advantages of updating PHP or don’t want to put in the work to do it. This has led to an overwhelming number of WordPress sites running on outdated PHP versions, which can lead to performance, support, and security issues.

With the release of WordPress 5.2, the minimum required version was raised from PHP 5.2 to PHP 5.6. Developers have noted that raising the required version has led to more users upgrading, which makes for a better WordPress ecosystem.

To continue improving the experience of WordPress users and the quality of their sites, the minimum required PHP version will increase again near the end of 2019. At that point, all WordPress users will need to upgrade to PHP 7.

While the upgrade won’t be mandatory for several months yet, upgrading now will mean you don’t have to worry about it in the future. Remaining on an outdated version of PHP will prevent you from updating your WordPress installation, so you won’t want to put it off!

2. Take Advantage of the Enhancements Available With PHP 7

We’ve already discussed many of the improvements made in PHP 7. If you don’t upgrade your PHP version you’ll be missing out on all the benefits of these features, but let’s talk more about what this means for your site.

Particularly, consider speed. This is one aspect of PHP 7 that will provide direct benefits to all WordPress users, regardless of skill level. Better performance means potentially higher conversion rates and more effective Search Engine Optimization (SEO).

A recent PHP benchmark comparison by Kinsta revealed PHP 7.0 is more than twice as fast as PHP 5.6. Plus, PHP 7.3 (the most recent version) is almost three times as fast as the current minimum version required by WordPress: 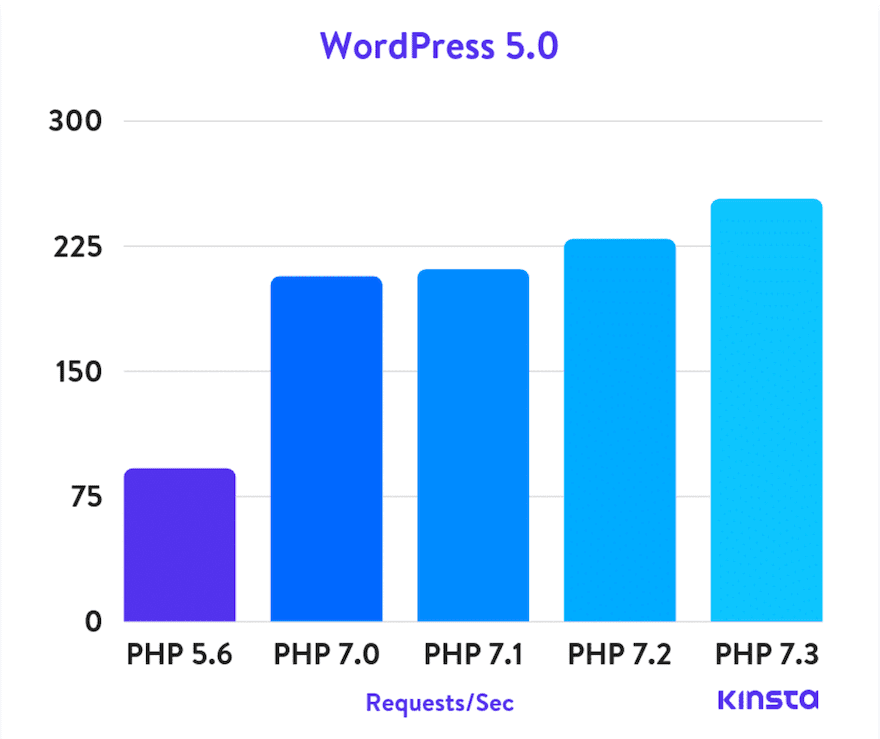 So, upgrading your PHP version will drastically improve your site speed. If you hold off, you’re only falling behind those competitors taking the decision to get ahead and upgrade now.

Compatibility issues account for some of the most common errors faced by WordPress users. When upgrading your PHP version, considering compatibility is key.

For starters, if you don’t take steps to check your current plugins’ compatibility with PHP 7, upgrading could cause your site to break. The good news is that you can prevent this by testing for incompatibilities before you upgrade. For example, if you’re hosted with SiteGround, the SG Optimizer plugin will do the trick:

Unfortunately, dedicated and quality tools are thin on the ground or no longer updated. This means you’ll need to put in some work by contacting developers directly to see if their products are compatible with your intended upgrade.

Despite the potential difficulties during the actual updating process, upgrading to PHP 7 should minimize the number of compatibility issues you have in future. This is especially helpful for WordPress professionals and anyone hoping to get started with PHP development for WordPress.

Plugin and theme developers wanting to use the advanced features offered by PHP 7 have to spend a lot of time ensuring backward compatibility for those on older PHP versions. Bumping everyone up to PHP 7 will let developers focus more on making high-quality products instead of supporting PHP 5.6.

Additionally, there are already many plugins and themes that have dropped compatibility with older PHP version. Upgrading now will mean you have access to more new tools, even if you lose access to some old and outdated ones.

If you follow WordPress’ security best practices, you keep your installation, plugins, and themes up-to-date. This prevents security issues due to unpatched vulnerabilities.

As such, updating your PHP version provides the same benefit. There are several known vulnerabilities in older PHP versions, and failing to patch them via updates will leave your site more open to attacks by hackers who are aware of these issues.

What’s more, it may come as a surprise to learn that support is no longer provided for versions 5.6–7.0. Without support (not to mention a poor quality host), you’re on your own if you run into problems. This could put you in a tight spot down the line.

This is why we recommend not just upgrading to PHP 7, but to PHP 7.3. This will ensure you have the full protection of the most recent security patches, as well as the backing of dedicated and direct support should you encounter any problems.

If you’re not using it regularly as a developer or advanced WordPress user, your PHP version may not have ever crossed your mind. However, ignoring recommended PHP updates for your WordPress site could result in you missing out on key improvements.

Here are four good reasons to upgrade to PHP 7 now:

Do you have any questions about upgrading your WordPress installation to PHP 7? Ask them in the comments section below!

The post Why You Should Upgrade WordPress to PHP 7 Now Rather Than Later appeared first on Elegant Themes Blog.